Over 2,000 New York firefighters took medical leave in the fight over COVID-19 vaccine mandates: 'We run into burning buildings for a living. We're not going to be bullied.' Over 2,000 of New York City’s 11,000 firefighters are on medical leave in response to the vaccination mandate that went into effect on Monday, requiring all city employees to be vaccinated without a testing option.

“Listen, this mandate was the right thing to do and the proof is in the pudding. We now see it worked,” Mayor Bill de Blasio said at a press conference on Monday, touting the statistics as proof that the mandate was a success.

Both de Blasio and Fire Commissioner Daniel Nigro called for those on medical leave to return to work.

“I want to say it is imperative that everyone come to work and do their job,” de Blasio said, adding that there would be consequences. “We have every reason to believe there’s a lot of people out there claiming to be sick, who are not. It’s not acceptable.”

While city officials have described the sick days taken en masse as a protest, Eric Bischoff, the Staten Island Trustee for the Uniformed Firefighters Association, said that is a mischaracterization. 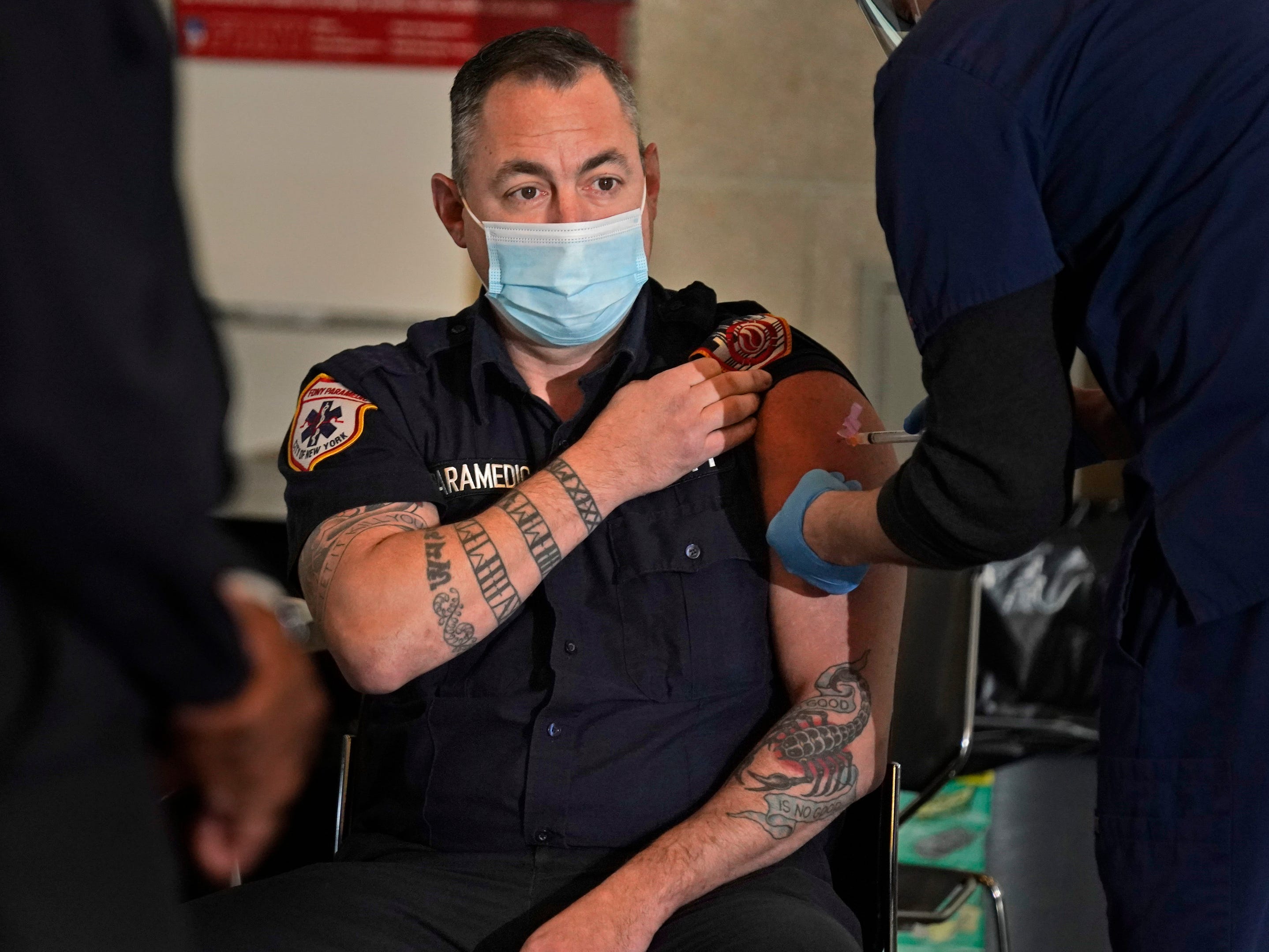 “There is no sickout. That’s a misconception that’s being crafted by the mayor’s office and the commissioner’s office,” Bischoff told Insider. “What they are trying to do is put the onus on the firefighters for this disaster situation.”

Bischoff claimed a number of firefighters were already sick and have COVID-19 antibodies, which scientists found last only months.

“From my people’s point of view, the firefighters, they had these antibodies, and they didn’t want to get the vaccination for a variety of reasons,” Bischoff said. “We are not anti-vaccine like the press has shown. It’s not true.”

While antibodies from contracting COVID-19 have been falsely touted as an equivalent to or even better than immunity from getting the vaccine, Arthur Caplan, the head of the division of medical ethics at New York University, said that is not the case.

“Immunity when you get sick wanes or evaporates faster than from a shot, partly because if you do get sick, you don’t get the same dose of virus,” Caplan told Insider. “Whereas the shot, you know how long it’s going to last, you know how much you’re getting.”

Data from the CDC has shown that Pfizer and Moderna’s two-shot vaccine series are highly effective at protecting people against severe COVID-19 and the risk of being hospitalized or dying from an infection. While some have called for a testing option in lieu of taking the vaccine, Caplain said it has its downfalls.

Read more: Some Americans were primed for vaccine skepticism after decades of mistrust in Big Pharma

“The testing option is great. It’s just expensive, and it’s a nuisance,” Caplan said. “So if you have a safe vaccine, why wouldn’t you take it?… If you take it, you’ll get even more immunity that lasts longer, so what’s the downside?”

Bischoff claimed a number of firefighters are out sick because they have side effects from getting the vaccine, which city officials denied. FDNY Deputy Commissioner Frank Dwyer told Insider that out of the 2,400 FDNY members that were out sick as of Tuesday morning, half of them are unvaccinated.

Republican Rep. Nicole Malliotakis, who represents portions of Staten Island and Brooklyn, echoed these claims, telling Insider that “there were dozens of companies that were shut down temporarily in these firehouses.”

“No matter how you look at it, it is a shortage in firefighters throughout the city that is reducing the capacity at these firehouses,” Malliotakis told Insider. “The city’s being misleading by saying, all the firehouses are open, but meanwhile, the ladder and engine companies within those firehouses could be closed.” 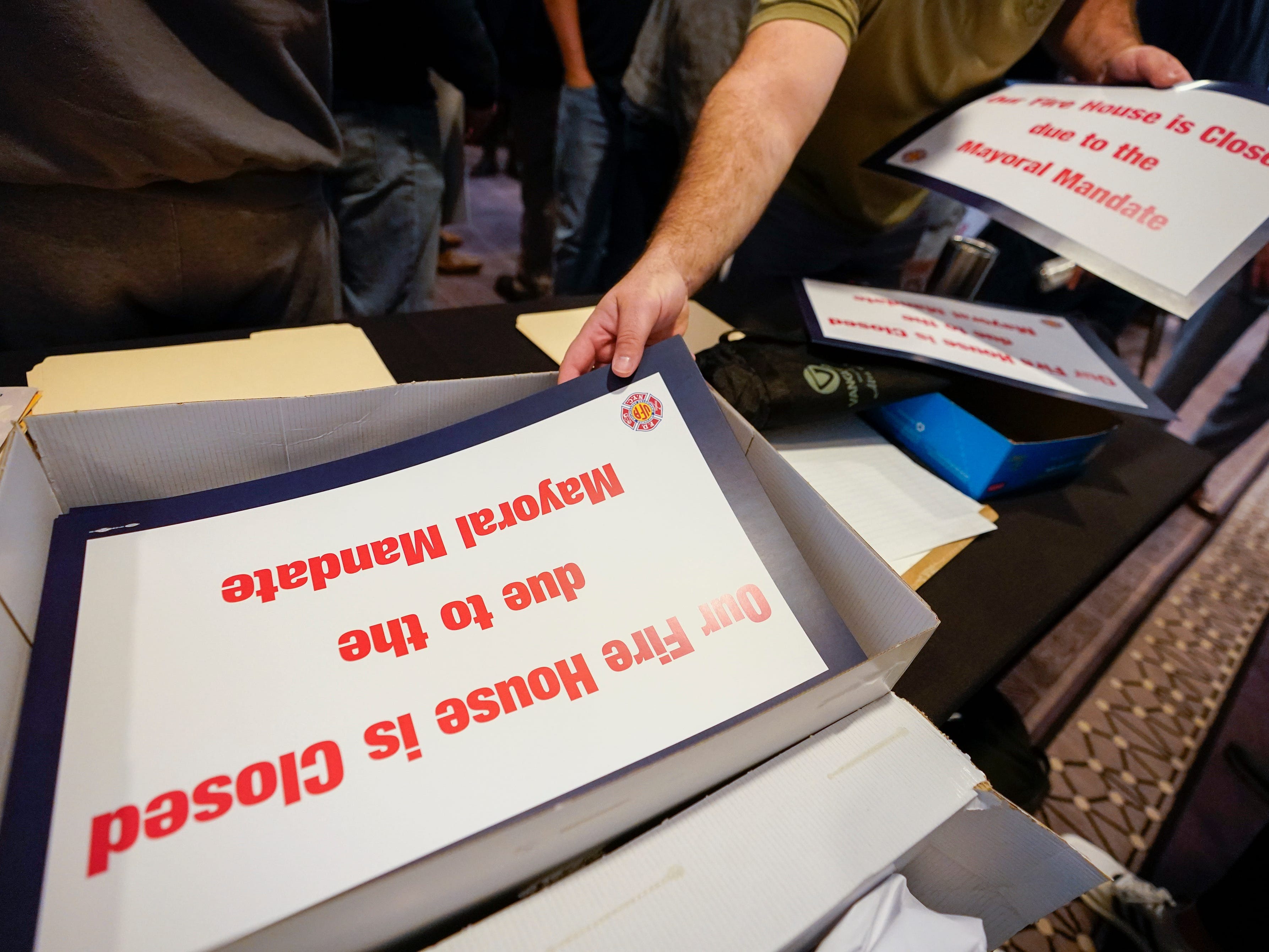 An FDNY firefighter picks up signs to display at his firehouse.

Dwyer and Nigro denied that response times were being affected or firehouses were shut down.

While the department “has not closed any firehouses,” Nigro said in a statement, he slammed the firefighters who went on medical leave amid the vaccination mandate going into effect.

“Irresponsible bogus sick leave by some of our members is creating a danger for New Yorkers and their fellow Firefighters. They need to return to work or risk the consequences of their actions,” his statement said.

Vaccine mandates on a local and national level have proven effective. Vaccination rates increased by at least 20 percentage points following President Joe Biden’s vaccine mandate for businesses, the White House said last month. In New York, where a vaccine mandate went into effect for healthcare workers in September, the vaccination rate of hospital employees doubled compared to the rate of adults in the state.

Bischoff said firefighters won’t be bullied by city officials like the mayor into taking a vaccine they don’t want.

“The mayor said, ‘You’ve got nine days to do it, or I’m going to ruin you and your family.’ We run into burning buildings for a living. We’re not going to be bullied by that guy,” Bischoff said about de Blasio.

Caplan said the firefighters would be braver if they got the shot.

“I thought these guys were brave heroes,” Caplan said. “You’re going to run into a burning building, but you’re not going to take a vaccine?”

Read the original article on Insider