Accepting his award, Allen advised others: “Keep being you, be obnoxiously yourself, because I feel like that’s what makes you special.”

Country singer Jimmie Allen gave a moving speech when accepting his award for New Artist of the Year at the 2021 Country Music Awards Wednesday night in Nashville.

The 36-year-old singer kicked off his speech by thanking his late father for introducing him to country music. Allen’s father, James “Big Jim” Allen, died in 2019.

Allen’s hit single, “Best Shot,” was released in 2018. It reached number one on the Billboard Country Airplay charts. 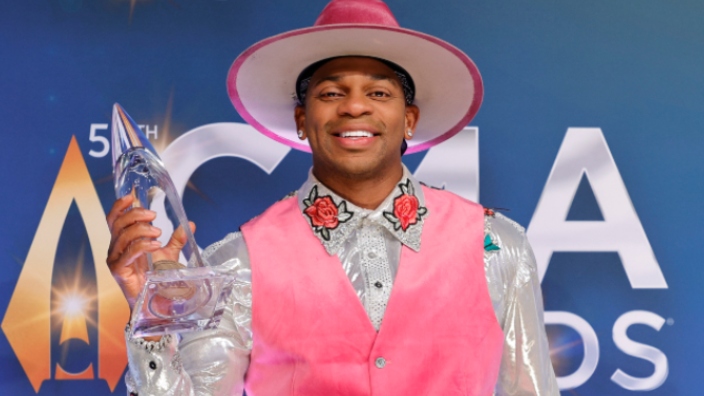 “Five years ago I spent my last $100 and came to the CMAs 50th to watch Charley Pride perform on stage, and I got to perform with him last year. Everyone who voted for me, thank you. My wife, I love you. My kids, my mother’s here. My manager Ash Bowers,” Allen said, as reported by Yahoo.

“Ash found me playing at a writer’s round at Puckett’s grocery store in Franklin,” continued the singer, “and signed me after 10 years of being here, living in my car, living in a trailer, working every job. This is amazing.”

He capped off his speech by saying, “Thank you, country music. This is for my hometown in Delaware.”

Allen is not new to the entertainment industry. He most recently served as a contestant on Dancing With the Stars, and auditioned for — and was cut from — both America’s Got Talent and American Idol. On the latter singing competition show, he became friends with Scotty McCreery, who won the 2011 season of Idol. The two later toured together.

Allen also won the American Country Music trophy for New Male Artist of the Year in April — the first Black musician to take it home.

In an interview with People after winning the award, Allen said he receives messages from fans inspired to get into country music after seeing him.

“I feel like representation is so important, so to see artists like Mickey Guyton doing her thing, Kane Brown, Darius Rucker, Willie Jones, Breland, Brittany Spencer, Tiera — it’s just so many that are starting to come to this genre of music, doing it their way, having their own sound,” he said. “And I love to see it.”

The singer said he had advice for fans and aspiring performers, “Keep being you, be obnoxiously yourself, because I feel like that’s what makes you special.”

“There’s only one of every artist we love,” Allen contended, “because they’re being who they are, and you’re the only one who can be you. So instead of trying to compare yourself to other artists, find ways to do things the way you do it because no one else can do it the way you can.”