Exclusive: The Tampa, Fla. rapper and his hitmaking mentor spoke with theGrio about LaTheGoat’s rise

There are few producers as consistently successful at molding young hip-hop talent as Jermaine Dupri. Having written and produced Kris Kross, being an early supporter of TLC’s Left Eye, writing number-one singles for Bow Wow and Da Brat, or crafting R&B/Hip-Hop hybrid hits for the likes of Xscape and Usher, his track record is undeniable.

For that reason, the spotlight is on his latest protégé, 26-year-old Lader Andrews, a.k.a. LaTheGoat, whose debut EP, My Time, drops Friday. The Tampa rapper displays a knack for storytelling and affirmation in his lyrics, all while rhyming with a youthful southern drawl over eclectic samples. theGrio spoke with Andrews and Dupri about their collaboration, Andrews’ come-up, and Dupri’s uncharted experience of signing an artist during the COVID-19 pandemic. 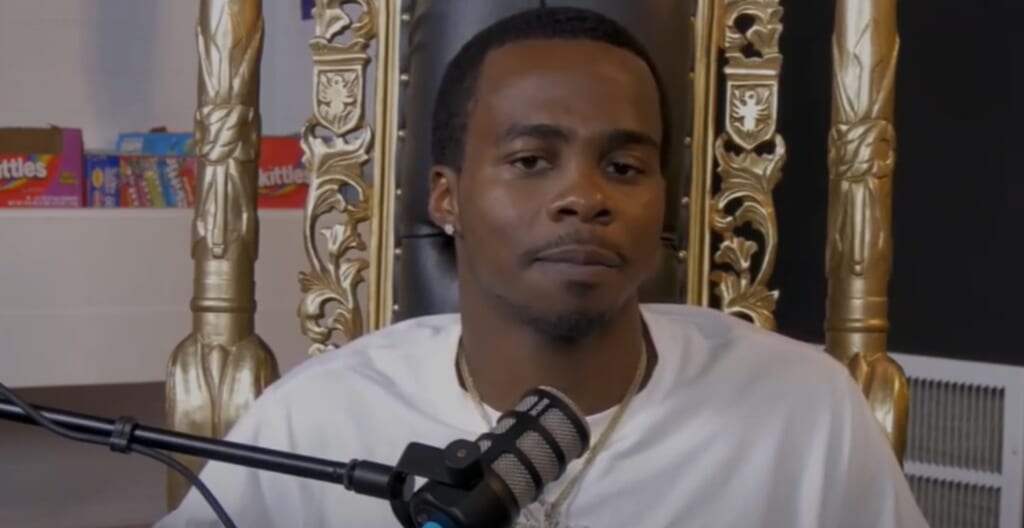 As a child growing up in Tampa, a city not known for its hip-hop community, Andrews was influenced by a full range of artists and sounds.

“I was influenced by like so many different types of music, from Michael Jackson to Sam Smith to Wu- Tang Clan, all that type of stuff,” he told theGrio. “So like, the rap scene is definitely growing now because everybody is starting to find their own sound and stuff, but Tampa’s on the rise right now.”

Although music was always omnipresent in Andrews’ life, he was 13 when he began to take music more seriously after watching rap battles on SMACK DVDs. From there, he embraced one of rap music’s biggest hallmarks: competition.

“I just think, like nowadays, the world’s so soft, that everything is just such like a tender subject, and like, music should be the last thing that such be a tender subject. That’s like, the only pure thing left,” Andrew said of today’s rap game.

After obtaining his GED, Andrews enrolled at Tampa Community College. Four months later, he transferred to Florida A&M University (FAMU). He loved the party culture at FAMU a little more than going to class, so he left and enlisted in the Army. “I made it through basic training, but I was fighting, so I got kicked out of there,” he said. Andrews returned home and worked at call centers for a while, but when that didn’t work out, he decided to put all his energy into his music. “So I got fired from every down job, but I could always rap good,” he said. “So I mean, that’s when I was like, ‘I’m going to be a rapper or I’ll have to do something.’ But the rap paid off, I guess.”

He began making music and honing his craft as an MC, freestyling and even sneaking his way onto other rappers’ video shoots to battle them. After a video of Andrews freestyling over Dupri’s “Money Ain’t a Thang” went viral, viewers bombarded the Atlanta music maestro’s social media to bring Andrews to his attention. Dupri ignored it at first, but his interest was piqued when he realized how many different people were sending him the freestyle.

“I’m like, If this many people were like, whatever this is, at least I need to listen to it, know I’m saying, and I just don’t want to miss out on something,” Dupri said. When he finally heard the freestyle, he reposted it himself, then looked Andrews up and found his song “8 Bands.” It impressed him enough to reach out.

“I think I went through all of those the process of elimination of all of those things, and I’m still not as bad a manager,” Dupri said. “Then I was just like, ‘You know, let me manage you, I’ll get you a deal.’”

Dupri was apprehensive about taking on Andrews because of the restraints of the COVID-19 pandemic in its early days. He couldn’t go through his regular routine of meeting face-to-face with the artist and was instead forced to make moves remotely. But he believed in Andrews enough to take the gamble.

“I might lose my money, you know? I mean, I might not,” Dupri said. “I might come out, you know, I mean, in a bit of space, but I had to take that. I had to make that decision. You have to definitely make that decision. And I just was like, You know, I’m sorry, I just got past the fear of that. Like, f— it. I believe in what I’ll believe in, what I’m listening to. I believe in our conversations. I’m going to go with my gut. So then I just start saying, I’m, you know, we’re going to make a deal for So So Def.”

With Dupri in his corner, Andrews began work on My Time, which he said came fast once in the studio. “So, kind of made the EP in a one day like in the studio,” Andrews said. “It was like a little process, you know, cleaning those lines in there. He work fast and I work fast. So that’s why it made it so easy.”

Dupri was not only impressed with his lyricism but his ability to formulate a song.

“For me, the crazy part about it is that was one of the reasons why I wanted to sign him, because that’s the one thing I asked him about ‘8 Bands’ when I first heard and I’m like, ‘Who taught you how to make a song?’” Dupri said. “You know, I mean, because he already knew how to structure records.”

From there, Andrews sent Dupri more music and that’s when Dupri realized that he had a diamond in the rough.

With “8 Bands” as the centerpiece, My Time features standout storytelling from Andrews. On “You Wouldn’t Believe Me,” he waxes poetic about his determination to make it in the rap game despite all the naysayers. His sample selection is also unique: On “Smooth Operator,” he rhymes over a sample of Jill Scott’s angelic ballad, “He Loves Me (Lyzel In E Flat).”

Andrews admitted that he felt pressure in the beginning. Signing with Def Jam via So So Def was something he never expected to happen as a kid seeing Bow Wow on the Scream Tour as his first concert, or playing the Def Jam: Battle for New York video g. So, he began to wonder if his songs would impress the label brass. “I’m like, ‘Sh-t, what if I don’t like it? The music ain’t good enough for them?’ Not for me, but for them, because I know, like in my city, they love it, but it’s bigger than that.“

But soon, after getting into the studio with Dupri, Andrews breathed a sigh of relief. “JD got a good ear for music. And so do I.”