“a blatant lack of resources, organization and leadership needed to prosper.” Tuskegee band director replaced after band refused to perform.

The Crimson Piper Marching Band of Tuskegee University will get new leadership after fed-up band members went on strike and missed two games.

The Crimson Piper Marching Band of Tuskegee University will get new leadership after band members went on strike to protest what they called “a blatant lack of resources, organization and leadership needed to prosper.”

The historically Black college will replace John Lennard with Warren Duncan as the acting band director, and will also hire an assistant to manage the band’s day-to-day operations, according to a report from WSFA, 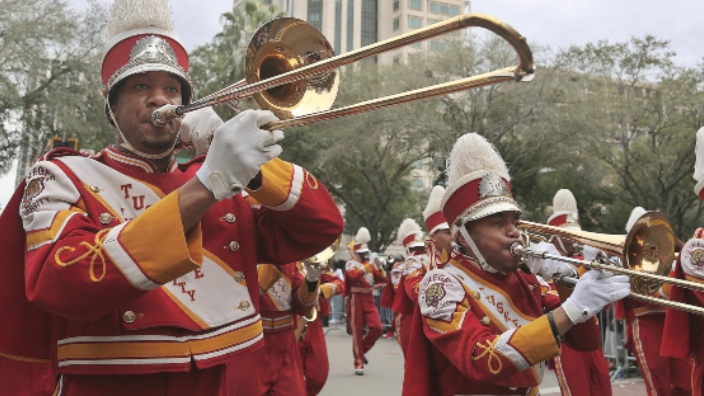 The band began its protest late last month, saying it would no longer participate in university-sponsored and -organized social events until its demands were met.

“In order to operate as an efficient collegiate musical ensemble, qualified and accountable leadership is a necessity,” band members wrote in a statement. “From the settings of rehearsal to vital performances, the band requires dependable staff who will not only guide us with strong leadership but who will also support us in the areas that we cannot support ourselves. With that being said, in addition to a head director with proper credentials, an assistant band director with proper sectional staff is paramount to guaranteeing the musical excellence expected of us.”

They also asserted that the band is underfunded.

“Sufficient salaries for band staff, coverage of travel costs and fair scholarship funding for its qualified members, including auxiliary, are all vital expenses that play in part to the establishment and maintenance of an efficient collegiate band program,” says their statement. “On that same token, the key reason as to why people decide to fund a program is because it creates an enjoyable product that people want to invest in, much like a business; in matters such as this, that product is good music with a clean, organized, visual aesthetic.”

The band noted that their enrollment at the HBCU meant that their tuition is higher than at predominately white institutions. They demanded adequate housing, that dietary needs be met, as well as for more transparency from university leadership and timely repair and replacement of musical instruments.

In addition to replacing the band director and hiring an assistant, Tuskegee University will also develop a committee to review the band, provide recommendations and long-term solutions to resolve student concerns, and procure new uniforms.

In announcing the leadership changes, Tuskegee University President Charlotte Morris noted, “Though more work is ahead of us, my goal is to create a shared vision for a path forward. Centrally, this includes how we can work together to ensure that the University’s actions reflect the Tuskegee community’s deep appreciation for the band and our unwavering commitment to students’ success.”